I first heard of gluten as an allergen in college over 20 years ago when I found out a neighbor had celiac disease. Back then there didn’t seem to be any commercially available gluten free items. Within the past five years, there has been a rise in the creation and availability of gluten free products in response to what has evolved as a fad in the never-ending search for healthier eating. And yet, for many, it’s not a fad, but a necessity–like it was for my college neighbor.

A few months ago, my husband started having allergic reactions to food where half of his lip would swell up. None of the food items seemed to have a common trigger–cheese stick, peanut butter sandwich, chicken nuggets. The doctor suggested that he cut out gluten. I also have two friends who experience severe stomach cramping and other IBS symptoms and their doctors suggested a gluten free dairy free diet. For  my husband and friends,  eliminating these allergens has helped them feel better, but it’s difficult to find gluten free dairy free treats that taste as good as their regular counterparts.

Erin McKenna’s Bakery, located at Disney Springs in Orlando, is the answer! Everything in the bakery is gluten free, dairy free, egg free, soy free, and even certified kosher.

When you walk into the bakery, you are faced with so many options. Usually if a bakery has an allergen-free items, they’re either special order only, or perhaps they’ll have one or two things in stock. But, here, everything in the bakery fits the bill. It’s hard to know where to begin. 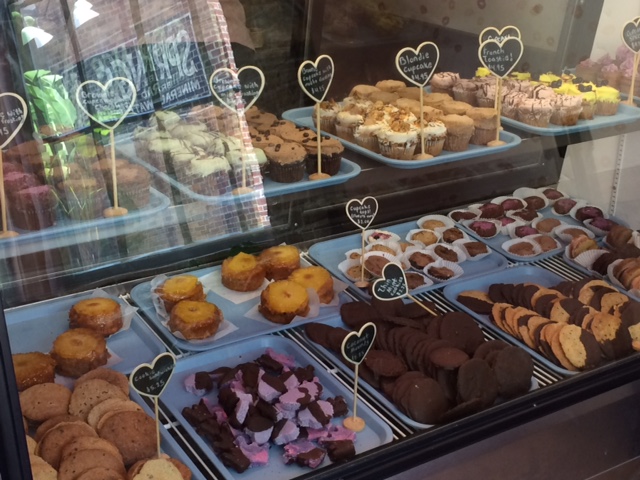 We selected a variety of items that tempted, and many of which delighted, our taste buds.

The cinnamon sugar donut  (upper left) was divine. It’s a cake donut that although a bit more dense than its regular counterpart, has a superb taste throughout, with a moistness that is difficult to achieve without dairy.

The blondie cupcake (upper right) is a vanilla cake with chocolate chips. It was dense but tasty. The frosting was very creamy and firm.  Once the cupcake warmed up a bit in the sun, the cake become lighter in texture.

The cinnamon roll (bottom center) was our only disappointment. Although it had a good cinnamon flavor, the icing was a glaze rather than a thick and creamy icing. That would have been acceptable had the cinnamon roll itself not been dry and dense. It tasted like an incredibly dry coffee cake–not quite what one wants in a cinnamon roll.

The lemon loaf cake (right) was our favorite item! It had a light but noticeable lemony taste. The cake is moist and the crumb was delicate. There was no noticeable difference between this cake and its regular counterpart. My husband absolutely loved this cake and I’m sure we’ll return to the bakery just to buy more lemon cake.

The pineapple upside down cake (upper left and upper right) was the largest item and very thick. The pineapple glaze on the top of the cake was phenomenal–sticky and sweet but not overpowering. The cake had a heavier cornbread like consistency but had a good taste. The only problem was that the cake was too thick, so much so that once we got through the top half of the cake, the bottom half was not as good because it lacked the pineapple glaze. If the cake only consisted of the top half, it would be perfect.

The samoa donut (bottom center) was moist and flavorful. It’s reminiscent of the classic Girl Scout cookie (in some areas known as caramel delights) with chocolate, coconut, and caramel–need I say more? It was delicious!

While not everything we tried was a hit, Erin McKenna’s bakery fills a much needed niche in the baked goods space. For those who find it medically necessary to cut out gluten, dairy, soy, or eggs, or are want to do so because they feel it’s healthier or otherwise follow a vegan diet, this is your bakery! And for those of you who want some seriously delicious cake donuts, lemon cake, or other baked goods, this is the bakery for you too!

I have a love of cooking and making people feel comforted, happy, and most of all, loved. I learned this from my Abuela who made me feel like the most important person in her life and showed her love through making and serving food. View all posts by thegourmandista